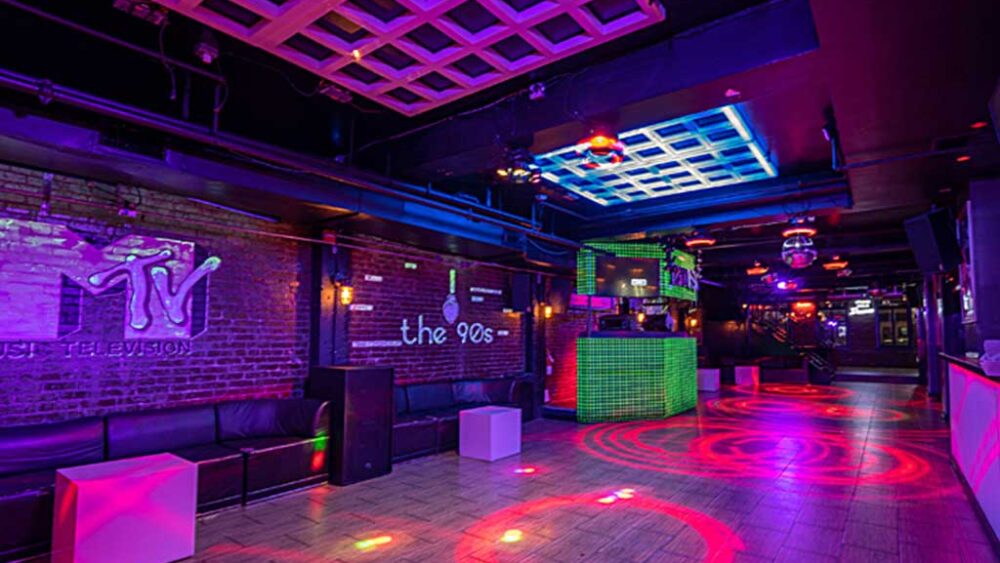 WASHINGTON, DC –Located in the heart of the nation’s capital, Decades is a 15,000 square foot retro-themed nightclub with four floors of entertainment each influenced by a different era of music. Drawing from the inspiration acquired over a career spanning four decades promoting many of DC’s most storied nightspots: Echostage, Ultrabar, the Mayflower Club, Barcode, Soundcheck, and FUR to name just a few; Decades represents the epitome of owner/operator Antonis Karagounis’ efforts. As part of an extensive facility remodel, Decades recently upgraded its sound reinforcement capabilities with a newly installed audio system supplied by Randy White of Washington Music Center, one of the nation’s leading music retail stores and the preferred partner for E11EVEN Sound by DAS Audio..

“The Rooftop is, without question, one of the most unique areas at Decades,” Fiorito explained. “With a rooftop that can be fully retracted or closed, the space can be configured for exclusive private events ranging from 50 to as many as 1000 people. Here, we deployed new E11EVEN Sound loudspeakers that are specifically weatherized for use in outdoor environments. This includes twelve ES-26DX-W (weather resistant) E11EVEN Sound by DAS Audio loudspeakers. These enclosures are configured as 2-way systems that incorporate twin 6B woofers to reproduce low frequencies, along with a 1-inch diaphragm driver. Low frequency support is provided by three E11EVEN Sound ES-218SDX-W weather resistant subwoofers—each outfitted with two 18LX low frequency transducers.”

Fiorito added, “Power amplification for these speakers are provided by one E11EVEN Sound by DAS Audio EP-10K4 amplifier and one EP-14K2 amp. Signal processing for the system includes a BSS Audio BLU-100 signal processor and a BLU-BOB1 Break-Out Box output expander. This was coordinated by Santiago Ruiz, a third-party contractor we work with that is certified for BSS and Creston installations for all E11EVEN Sound by DAS Audio projects that require programming.”

“The 90’s area and 2000’s floor is another space that benefits from a new E11EVEN Sound by DAS Audio system,” Fiorito reports. “Here, we deployed four DAS Artec-308 loudspeakers along with six E11EVEN Sound ES-10 enclosures in each floor. As with the Hip-Hop area, low frequency support is provided by four DAS Action-S218 and one Action-S18 sub. Power amplification for these come from two EP-14K2 and two EP-6K4 amps.”

Like many installations involving sizeable amounts of electronic equipment, questions arise. Hence, capable and responsive support services are crucial. In this regard, Rodriguez was very complimentary of DAS Audio. “The DAS team is always ready to assist,” he said. “John Fiorito is an integral part of the company’s E11EVEN Sound projects, so it’s easy to get the information I might need. The DAS team and Washington Music Center are always quick to respond, and that makes everything much easier.”

The Decades E11EVEN Sound installation took place in August and was placed into service immediately upon completion. Since that time both customers and owner Antonis Karagounis report being very impressed. “I can’t emphasize enough how important clear and natural sound is to nightclub and fine dining environments,” Karagounis explained. “The music must be appealing, as this is a major part of the ‘vibe’. Without quality sound—at appropriate levels—it’s too easy to alienate your customers. Equally important, speech intelligibility is crucial because, if an announcement can’t be understood, people get frustrated and start looking elsewhere. John Fiorito, Randy White, and Willy Rodriguez were all very ‘hands on’ throughout the entire process and the results speak for themselves. I couldn’t be happier. Decades is the result of many years in this industry, and it is my passion project. There’s a reason I don’t trust anyone else to do this for me.”

Headquartered in Valencia, Spain, DAS Audio is one of the world’s leading manufacturers of loudspeaker systems, power amplification, signal processing, and related components. DAS Audio products are found on tour with the world’s greatest performing artists and installed in many of the most prestigious facilities. For additional information about DAS Audio, visit the company online at www.dasaudio.com/en/.