Blog
11sound.com / Press / The Vibe at Brick Miami Gets a Dramatic Boost via E11EVEN Sound by DAS Audio
Sep 12 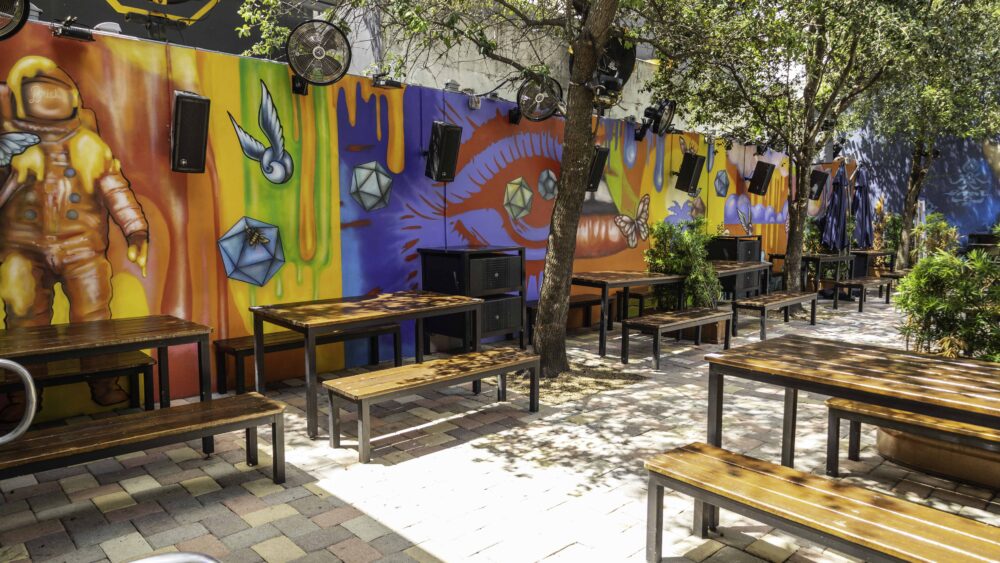 Located in Wynwood, one of Miami’s most prominent entertainment districts, Brick is one of the area’s hottest nightclub environments. Patrons enjoy a truly unique nightlife experience that includes hip hop music by some of Miami’s top DJs. With a full menu in addition to its bottle service, guests can celebrate into the early hours of the morning in a manner that is truly indicative of the South Florida vibe. To ensure the energy level is at peak performance, the venue recently upgraded its sound reinforcement capabilities with a newly installed audio system featuring components from E11EVEN Sound by DAS Audio.

“Brick is an outdoor nightclub, so it was very important to deploy a sound system that could withstand the weather here in Miami, which can change on a moment’s notice,” Rodriguez explained. “To address this issue, we installed an E11EVEN Sound weatherized system at the venue. E11EVEN Sound by DAS Audio is the best sounding club system on the market, and it includes the best warranty for customers—all at very competitive pricing.”

“For audio processing, John [Fiorito] specified two E11EVEN Sound ESP-260 DSP’s” Rodriguez reports. “With nine parametric bands on each output and eight on each input, this processor provides some flexibility, and it can be managed with DASnet pretty easily.”

As is the case with many sophisticated installations involving electronic equipment, questions periodically arise. As a result, capable and responsive support services are crucial. In this regard, Rodriguez was very complimentary of DAS Audio. “The DAS team is terrific to work with,” Rodriguez said. “John Fiorito is very actively involved in the company’s E11EVEN Sound projects, so it’s easy for me to get the information I’m looking for. The company is always quick to get back to me, and that makes it much easier to keep a project on schedule.”

The new E11EVEN Sound by DAS Audio system installation took place in June 2022 and the system was placed into service shortly afterward. Since that time, the new system has been met with much enthusiasm from both management and customers alike. “All of us at Brick are extremely pleased with the new DAS sound system,” says Gregory Blanco, Club Manager at Brick. “The system sounds great and delivers all the power we were hoping for. John and his team were always actively involved in the project and clearly explained everything we asked of them. Likewise, Willy Rodriguez did a great job with the installation. We couldn’t be happier!”

Headquartered in Valencia, Spain, DAS Audio is one of the world’s leading manufacturers of loudspeaker systems, power amplification, signal processing, and related components. DAS Audio products are found on tour with the world’s greatest performing artists and installed in many of the most prestigious facilities. For additional information about DAS Audio, visit the company online at www.dasaudio.com/en/.