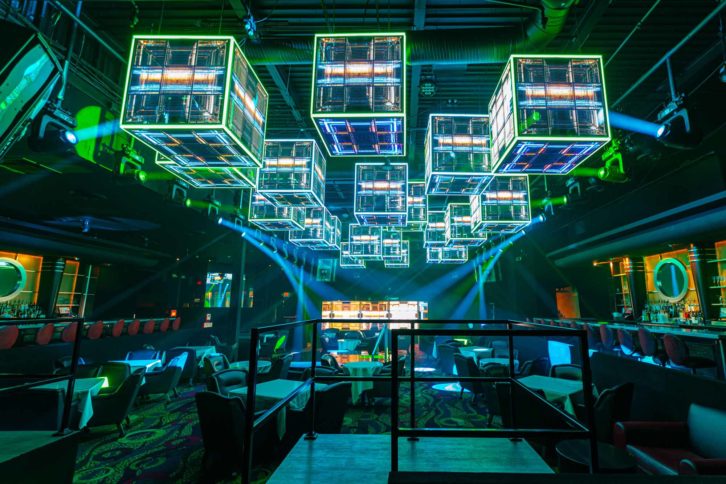 DAS Audio Injects a New Level of Energy into The Cheetah

Situated in Atlanta’s bustling Midtown and surrounded by lofts and high-rises, the Southeast’s most renowned gentlemen’s club— The Cheetah—is home to the legendary CheetahGirls, the most beautiful adult entertainers in the South. The Cheetah caters to the highest expectations in adult entertainment, and has welcomed thousands of conventioneers, businessmen, and devoted local customers for more than 40 years. The Cheetah recently underwent an extensive renovation that included lighting and visuals in addition to a new and vastly more capable sound reinforcement system. And at the heart of the new sound system are loudspeakers drawn from the E11EVEN Sound and Vantec catalogs of Valencia, Spain-based DAS Audio.

idesign, a full-service, Miami FL-based lighting, video, and audio company that caters to upscale establishments such as nightclubs, lounges, hotels, resorts, and restaurants worldwide, was contracted to design and deploy the new audio-visual setup at The Cheetah. Working in close coordination with John Fiorito, DAS Audio of America’s National Sales Manager for Nightclubs and Hospitality for the sound reinforcement portion of the project, idesign’s owner and lead lighting/video designer Michael Meacham penned a setup that is nothing short of breathtaking—including video cubes, strobes, lasers, and video screens in addition to the DAS E11EVEN Sound and Vantec loudspeakers. Meacham discussed the project.

“The Cheetah’s Main room / DJ stand is at the heart of all the activity,” Meacham reports. “These areas use a combination of live and DJ-sourced music. Here, we deployed a combination of four E11EVEN Sound ES-112 3-way passive point source loudspeaker enclosures—each consisting of a 12-inch horn for the midrange, an M-75N neodymium compression driver, and two bullet tweeters for the high end. These are mated with eight E11EVEN Sound ES-215 passive subwoofers, with each enclosure holding two 15-inch neodymium transducers. Completing the setup, there are also four E11EVEN Sound ES-221 2 X 8800W ground stackable subwoofers—each outfitted with twin 21-inch transducers and 6-inch voice coils in a crossfire enclosure configuration.”

“For the DJ booth,” Meacham continued, “there are a combination of four DAS Audio VANTEC-20A active curve sourced line array enclosures serving as the monitors. Each enclosure is outfitted with a low frequency driver, a high frequency driver, plus a horn/waveguide. These are accompanied by two VANTEC-18A powered subwoofers, each enclosure outfitted with an 18-inch transducer.”

When queried about the E11EVEN Sound loudspeakers, Meacham discussed those attributes that he felt really stand out, “The DAS E11EVEN Sound loudspeakers are a premiere product specifically designed for venues such as The Cheetah. They produce very high sound pressure levels with the utmost clarity. The loudspeakers are custom made and have a variety of horn coverage pattens available to ensure there will be no dead spots and superb coverage throughout the venue.”

With sophisticated installations such as the one at The Cheetah, questions invariably arise. For this reason, responsive and capable support services are crucial to keeping a project on track. In this regard, Meacham was very complimentary of DAS Audio. “DAS Audio is the only manufacturer that provides direct support for the installation dealer, including design, project management, and on-site visits while ensuring the sound system is perfect and the customer is 100% satisfied,” he said. “Their products also have the best warranty in the industry—5 years with immediate replacement should anything fail—with no cost to the client. You can’t beat that!”

Jack Braglia, The Cheetah Lounge owner, knew the time had arrived for the venue to get a massive renovation. After several months of strenuous work and challenges, he is thrilled with the DAS Audio E11EVEN Sound setup along with the curated lighting and video systems installed. The lighting, video and audio systems are beyond anything Jack had anticipated. The Cheetah is quickly becoming a top destination, cabaret style club of the southeast for DJ’s and celebrities alike.