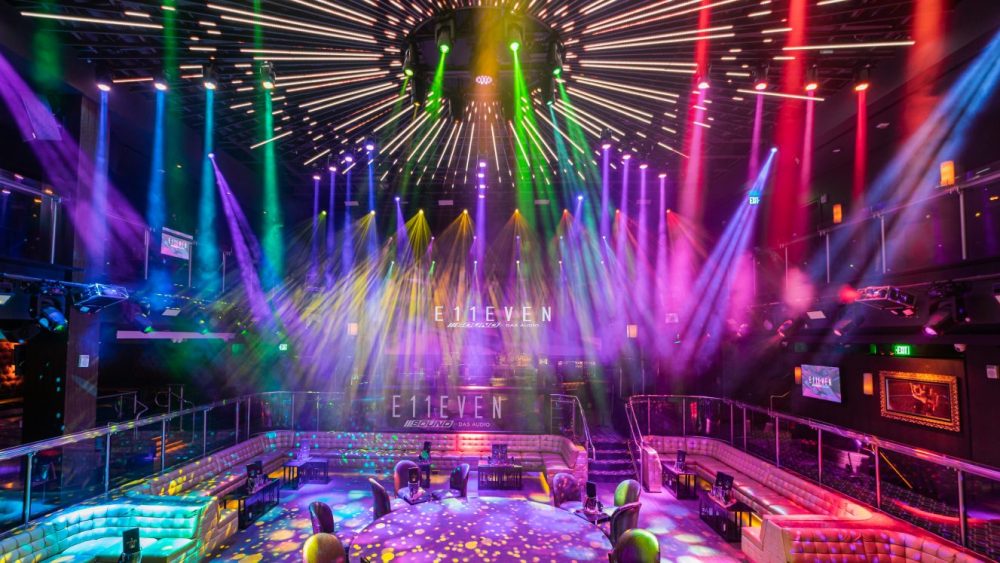 Offering luxury, sophistication and a truly one-of-a-kind experience, the venue has picked up numerous awards, including the Best New Concept award, as well as landing on the Top 10 Nightclubs in America, awarded by Nightclub & Bar. It’s clear that the $40 million landmark destination, which seamlessly operates as a nightclub and after-hours experience, has put itself firmly on the map as a must-visit club.

A huge part of the award-winning experience at E11EVEN is down to attention to detail when it comes to state-of-the-art technology. This was clear to see from the club’s first contact with John Fiorito, Nightlife & Hospitality Design / Installation Specialist at E11EVEN Sound by DAS Audio, who designed the new audio system at the venue.

“After two years of building a solid relationship and trust, I was asked by the owner to make the sound better and I began pondering with design ideas and products. Over two years as an audio designer, installer, and manager for Sound Investment, we were selling a lot of DAS Audio products. We found the speakers to have fantastic sound quality, plus product was readily available and there was excellent support from DAS Audio Spain Engineering. So, we began to discuss a premier dance club product that would blow away the competition in all aspects of sound and price.”

Such was the dedication to the sound quality at the venue, E11EVEN Group and DAS Audio announced a partnership to launch a new brand of sound systems – E11EVEN Sound by DAS Audio. The Miami-based corporation and the leading Spanish sound manufacturer reached a strategic agreement to offer a new way of understanding sound and entertainment

John furthered: “Working with Javier Navarro, Head of Engineering for DAS Audio, we developed a state-of-the-art product that delivered a superior sound quality beyond any of the competition – and we were able to offer the products at affordable pricing. Due to the cost of insurance for nightclubs, build-out cost, rent if the operator does not own the building, the cost is astronomical to open a large nightclub. In sales history, operators always cut on the lighting or sound when it comes to budgeting choices. The new E11EVEN Sound by DAS Audio provides the highest quality at affordable pricing, so when an estimate is provided to a client, they do not have sticker shock.  That is why E11EVEN is a partner with DAS Audio, with idesign also being the first vetted and authorised design and installer of the product.

The two companies bring different approaches to an industry in which service is as important as the product. In recent years, the club scene has evolved generating new needs for club owners and technicians. Hence, pre-sales, training and tech-support are the foundation of E11EVEN Sound by DAS Audio’s business vision.

“A considerable advance has been made in the use of video and lighting to generate special effects in clubs, but there is still a lot of work to do on the non-visual elements. Our intention is to elevate the audience’s experience to a sensory feast full of surprises and create memorable experiences,” added Gino LoPinto, Operating Partner at E11EVEN.

The new brand has been created to bring sound back to the forefront of the nightclub sensory experience – and that is something that they have achieved at E11EVEN, as John explained further: “I was given instructions by the creator / owner of E11EVEN to make the sound like a studio; better vocals, cleaner low frequencies and add anything missing.

“The design process started with what the demands were of all artists, live or DJ, for E11EVEN. When designing a DJ sound system, we want it to run at 60% maximum at full volume. We take this approach to ensure no distortion, less wear and tear on components, to ensure the amplifiers are not over driven and for the finest guest interaction experience.

“The main Party PIT has loudspeakers designed with the precise coverage of the room to ensure all areas are considered sweet spots. Everywhere where a customer can sit or stand allows them to hear every frequency – there are no dead spots or lack of audibility. Each area of the club – all VIP areas and the Day Club – are designed with the same concept and proper coverage. The system runs in stereo with mono sub bass.”